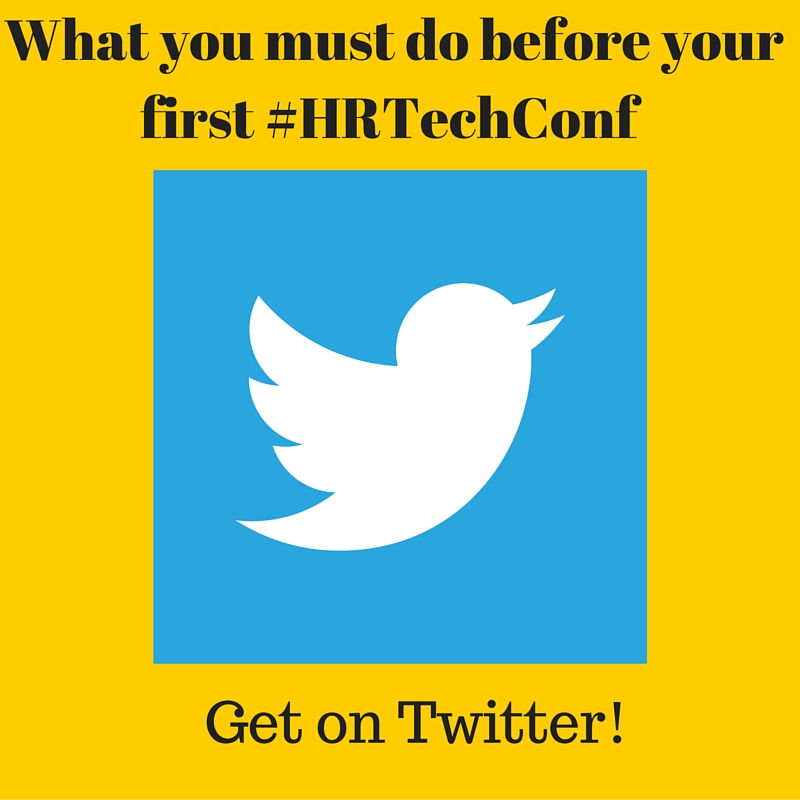 If you’re wondering what you need to do before your first #HRTechConf , you need to get on Twitter.

HR Tech conference attendees use Twitter to communicate, advocate, and interpret their experience, one tweet at a time.

Last year I witnessed the Twitter frenzy in person at #HRTechConf. According to HR Marketer, “6,374 unique people/brands tweeted (original tweet or a retweet) using the #HRTechConf hashtag”.

That’s a large group of people who tweeted.

The audience gets even bigger when you consider that in addition to those nearly 6,5oo people (or brands) that tweeted something while they were at the conference, their tweets, retweets, and favorites were also seen by their followers on Twitter. Think of it that way, and the brand exposure on Twitter becomes exponential.

Think of just how many people you can reach by using the #HRTechConf hashtag!

If you’re overwhelmed by the thought of all those tweets, here are four steps to get you started.

Set up your account. Add an image. Create a tagline. Briefly explain your purpose and link your profile to your website.

Start tweeting about what you’ll be doing at the conference and include the conference hashtag in your tweets. Share what sessions you’ll attend. If you’re presenting, let people know. Share your expo booth number, if you have one. Consider hosting a contest to drive people to your booth, or to encourage them to follow your Twitter handle or re-tweet your content. Tweet relevant content from your website. Connect with other people in the HR Tech space (see step 3).

An important element of using Twitter successfully is having  a conversation with other people, rather than just spewing your own thoughts about any given topic. Check out what other people interested in HR Tech are saying. Follow those people on Twitter, and share any of their tweets that resonate with you. Reply their tweets to engage thought leaders in a conversation.

@Ray_anne: genuine on Twitter and even more so in person, Rayanne Thorn brings marketing smarts, Twitter savvy, and a solid tenure in HR to the #HRTechConf conversation. You’ll also find her hosting the blog radio show HR Latte. Like I said, she’s dialed in.

@MeghanMBiro: when it comes to HR strategy and tech, Meghan is present and engaged. She’s the founder and CEO of @TalentCulture and Co-Founder of the #TChat World of Work Community which is focused, in part, on making #hrtech work for everyone involved.

@WilliamTincup: this guy rocks. He’s the CEO of the HR consultancy, Tincup & Co. As far as HR tech adoption is concerned, he’s a leading expert. He’s blunt, honest, and from what I can tell, pretty darn smart – in addition to being an amazing marketer. I’ve seen him present live and via webcast. Follow him on Twitter and he won’t disappoint.

@SteveBoese: he’s the co-organizer of #HRTech and will be busy tweeting before, during, and after the conference.

@BillKutik: he’s the “father” of the #HRTechConf. I remember last year he put out a tweet saying, “Hey everybody, let’s look up from our devices and try talking to each other in person.”  Good point. He’s someone to follow if you’re looking to understand the new world of work today, tomorrow, and beyond.

When the conference opens its doors in Las Vegas on October 18, set up a stream so you can follow #HRTechConf. And then get ready. Once the tweets begin, it’s like drinking from a fire hose for four days. Check out what people are saying. Favorite, share and re-tweet as you find good comments and ideas. Add your thoughts to the stream. Find new people/brands in the feed that you want to follow. (Check out this guide from buffersocial. It provides spot-on advice for how to participate a Twitter live feed.)

This is an overly-simplified version of what it takes to engage with others on Twitter during a conference. If this sounds like something you want to do for your brand, but you don’t have the time or the team to make it happen, contact me. One of the services I provide is live tweeting support from industry conferences. It’s a win-win: you get the Twitter support you need, and for whatever reason, I seem to like drinking from the fire hose for four days.