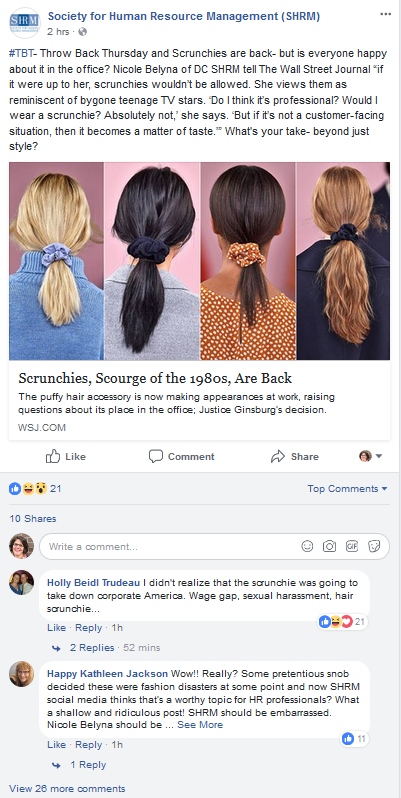 Last week I was scrolling through my Facebook feed at around 6 am.

I noticed a headline from the Society for Human Resource Management (SHRM) page I follow. (I’ve included a screen shot for reference.) The first line reads: Throw Back Thursday and Scrunchies are back.

Having worn a few scrunchies in my day, I had to click on the link.

The post was an article from the Wall Street Journal (WSJ) about scrunchies and dress codes. The WSJ article contained a quote from a SHRM member about her thoughts related to scrunchies: “Do I think it’s professional? Would I wear a scrunchie? Absolutely not,” she says. “But if it’s not a customer-facing situation, then it becomes a matter of taste.”

That SHRM decided to post the article struck me as odd—are scrunchies a worthy topic to post about on a professional organization’s Facebook page? The tie-in for throw-back Thursday was clever, but it also made me question the judgment of the person behind the Facebook account.

Apparently, I wasn’t alone in wondering about the value of the post. By the end of the day, there were 200 comments, more than 40 shares, and a lot of angry emojis. Most of the responses rebuked SHRM. Here’s a sample:

“Wow!! Really? Some pretentious snob decided these were fashion disasters at some point and now SHRM social media thinks that’s a worthy topic for HR professionals?”

“Good lord, with ACTUAL problems in the world and the workplace and THIS is what SHRM wants to tackle … how a woman accessorizes?! Go do an article on #MeToo or #TimesUp or pay equality or FMLA.”

The SHRM social media team was busy that day. From what I could tell they responded to many, if not all, of the comments. Their basic approach was to:

If we’re communicating with an audience and readers via social media, we can learn a lot from this experience.Your followers are watching what you do. They are smart. And, they have a voice. When you’re engaging with your community, be judicious about what you share on social media. And be ready for each and every possible reaction.

In the case of what I now refer to as the “SHRM Scrunchie Debacle,” I came away impressed by their social media team. Did they really intend to “start a discussion”? Maybe…or, maybe not.

But once the discussion began, they didn’t run and hide. They didn’t delete the post. Instead, they responded and reacted in a sincere and meaningful way.

Hopefully the sincerity and appreciation they expressed is what their Facebook community will remember.