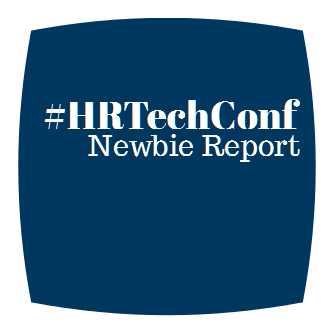 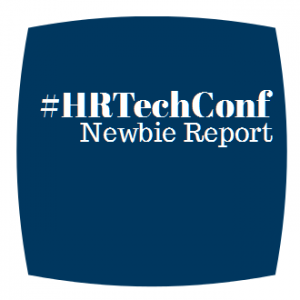 I joined Twitter in August 2010. My first tweet was a celebratory note to an editor who had selected one of my essays to include in her anthology. (Unfortunately my essay was eventually cut before the book was published – sniff, sniff – but that’s a story for another time.)

My next tweet was three months later. Fast forward four months, and you’ll see a few more tweets. In 2012 I had several spurts of Twitter activity. But it wasn’t until 2013 that I started gaining a little more momentum. I credit this momentum to the fact that I (finally) gave myself permission to stop obsessing about saying *just* the right thing in 140 characters or less.

And I began to witness the connections Twitter creates for people in the world of HR.

In October 2013 I was in front of my computer, watching the #HRTechConf feed on Twitter. While attempting to read and follow the flurry of tweets, I found myself hoping someday I might be able to attend the HR Tech Conference.

Hopes come true. This year I was one of the 8,000 people at the conference in Las Vegas. And, I’m here to report: the #HRTechConf is awesome. (As in causing feelings of awe and being extremely good.)

I went to the conference to support social media for one of my clients. We had a great plan going in and came away from the event feeling fabulous about our results. Add to that the professional benefit I found in attending the conference and I’m feeling pretty great.

As a newbie, there were moments when the #HRTechConf was overwhelming – there are a lot of people to meet, there’s a lot of information to grasp and there’s a 300-booth Expo Hall to walk.

Now I’ve made 790 tweets and the #HRTechConf flurry I witnessed on Twitter a year ago makes sense.

At its core, the HR Tech Conference creates a space for connections. Those connections are what enable all us HR geeks (vendors, bloggers, HR practitioners) to leverage technology so we can focus on what matters most: the people.