If you want to make an impact with your HR trade show booth, you need a solid strategy. In a previous post, I highlighted the steps that Archbright, an HR services provider based in Seattle, used to make their trade show booth stand out at the Lake Washington HR Association (LWHRA) Annual conference. Three steps to a successful HR trade show booth include:

I explained step one in detail a few weeks ago. In this post, we’ll look at how to create an HR tradeshow booth strategy that uses social media to entice visitors to stop by your booth.

As I mentioned, the team at Archbright took to social to get the word out about their booth before the conference. Prior to an event, make a strategy for how often you want to socialize your attendance and what you’ll include in your social media to entice visitors to stop by. Consider these questions as you plan your approach:

What is the consistent message we want to convey about our booth via social?

One of the successes of the Archbright approach was that they had a very clear message on social: stop by our booth and color. That message drove the words they used, as well as the associated graphics. Attendees knew what to expect. The clearer you can be about what someone will experience or receive when they visit the booth, the better. They may have a long list of vendors to visit, make sure you answer the question, “Why should I visit this booth?” 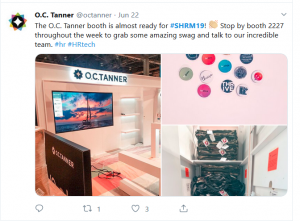 In the example pictured above from O.C. Tanner, their team used a tweet one day prior to the conference to provide a visual of their booth (easier to find), an image of some of their give away items (love those buttons!), and an invite to talk to their team about #HR and #HRtech.

Pro tip: In addition to your message, look for other tweets or posts about the conference and include those as part of your strategy. Don’t rely on just your content, leverage the sense of community that comes from sharing others’ content. Find other people talking about the conference and respond. Once you’re part of the conversation, people are more likely to want to engage with you at your booth.

When do you want to start socializing your booth?

You’ll want to determine timing based on the audience, the size of the event, and the number of attendees. I’ve found that the national audience of HR professionals is very busy on Twitter. If you’re going to use Twitter for a national event, you need to plan an aggressive strategy to get noticed. A local HR audience may only get active on Twitter a few days before the event. 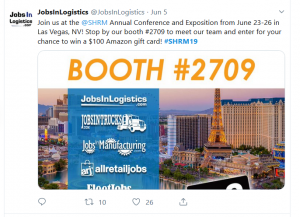 For a national event, a safe place to start is at least a month prior to the event, then two weeks prior, and the week prior to the event ramp up into daily posts related to the event. In tweet above, the team at Jobs In Logistics shares their booth number, as well as their message and the conference hashtag, on June 5 in preparation for #SHRM19 which began on June 23.

Pro tip: Do some homework prior to the event to gauge interest on your channels–find the conference hashtag from last year and see how many people used it, when they started using it, and how often. Use that intel to inform your strategy.

How often do you want to socialize per channel?

This study from Co-schedule has helpful information about how often to post, based on the channel. For example, they found 15+ tweets per day to be common on Twitter. Mind you, you won’t want every tweet prior to the conference to be about your booth, but this does give you an idea of the frequency. Similarly, they suggest that one post per day is the most common on LinkedIn. 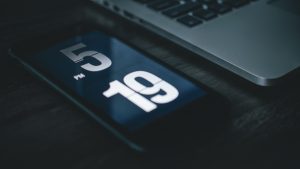 As you build your strategy, consider the time it takes to create a post and an associated image, as well as schedule the post, and respond to any replies or retweets. What may seem easy on the strategy wall can actually require a significant amount of time from your team.

Pro tip: If using social to entice people to come to your booth is a new approach, be wary of jumping onto a new platform just for the conference. If you engage with the conference audience, you want to keep the momentum going–social trust is built when people see you and engage with you on that platform before, during, and after the conference.

Hopefully these three questions spark the discussions you need to create a solid HR trade show booth strategy that includes social media. Engaging with participants via social offers a powerful way to build a sense of connection before they’ve even reached your aisle.

Check back next week when I’ll be offering tips for how to follow up after the conference to maximize your investment.